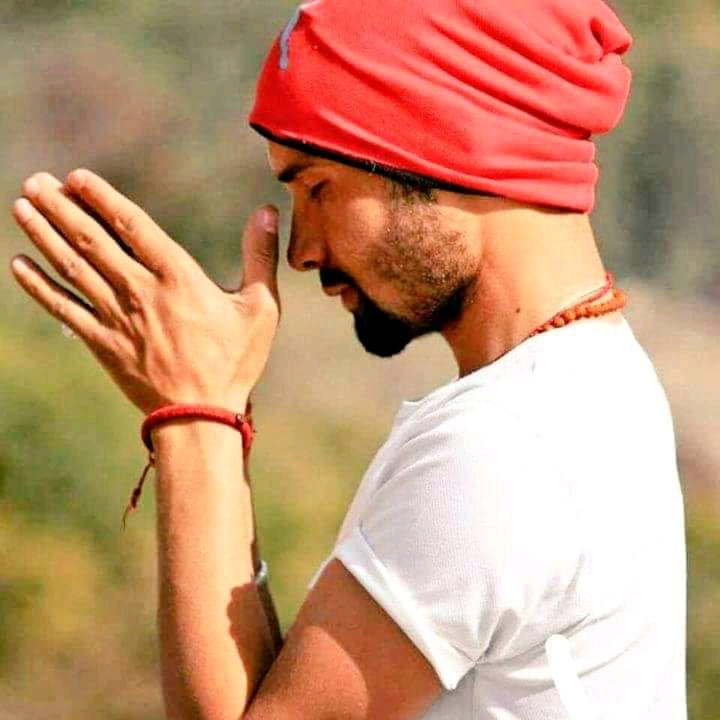 Growing up in a mountain village near the holy city of Rishikesh, India, I got access to the ancient Yoga tradition from a very young age on. Starting with living in Jai Ram Ashram for 6 months where I got certificated in traditional Hatha Yoga. Motivated and inspired to learn more I attended a 200 hours Teacher Training for multi-style Yoga certificated from Yoga Alliance.

Further I was blessed to get trained in my everyday practice from Ravi Ji in Hatha Yoga and Pravin Nair in Iyengar style for several years, specialising in proper alignment and adjustment.

Finally I just finished my study at Uttarakhand Open University in MA Yoga (Master of Yoga) with Focus on Ayurveda and Naturopathy.

Convinced that YOGA is for Everyone it is my mission to spread the knowledge, wisdom and methods of the traditional Yoga styles and make it accessible and exciting to learn for people worldwide.

Whether you are just starting your yoga practice or you are an experienced student, I can assure you that the journey of Yoga will be fun and very rewarding for your body, mind and spirit - if you do it in the right way, focusing on the proper alignment and adjustment regarding the asana practice and a conscious way of eating - and I am here to guide you exactly an this way!

With an holistic and traditional approach, which I focus on, you will learn more than you ever thought possible about your own body and mind as well as the possibilities of your practice.

THE ART OF TEACHING & BUSINESS ASPECTS 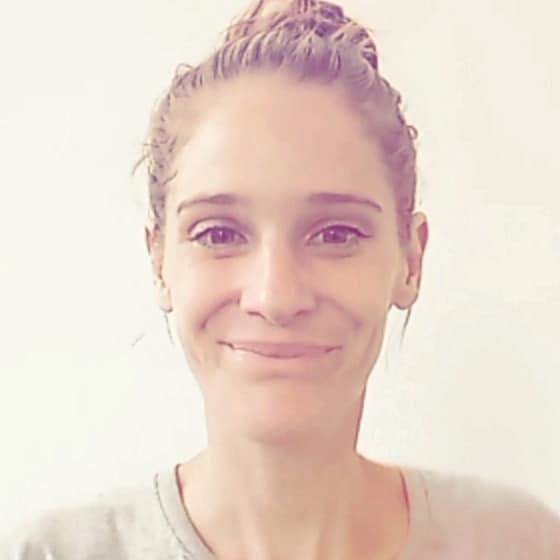 I found Yoga while I was studying Ethnology in my home country Austria and it immediately ‘got’ me, so that I not only started to practice mostly traditional Hatha Yoga and Sivananda Yoga regularly, yet also focused on its ancient wisdom and concepts in a scientific and theoretical way within my study.

Later on  I attained a 200 hours Teacher Training focusing on traditional Hatha Yoga and Sivananda Yoga in an Eco Ashram in the South of India. Since that I am teaching in India, Thailand and Italy and deepening my knowledge, understanding and practice in joining workshops, trainings and individual coaching classes.

Studying Ethnology and Yoga, travelling in Asia for many years, living mostly within beautiful local communities, as well as exploring and expressing my creativity with drawing and painting as well as studying multidimensional art therapy has brought me close to Mother Nature and my Inner Self and has let me realize, that a Nature aligned life is the only way for a happy, fulfilled and responsible way of living.

Yoga and Ethnology taught me about Life itself, about living WITH our Inner and Outer Nature, expressing and living our truth and unique potential.

That is why combine  Yoga with  intuitive creative Selfexpression and ancient wisdom and created the Soulcreation Ethno Yoga Program and what my motivation is all about - to raise the awareness of the importance and beauty of a sustainable, peaceful and joyous and fully expressed life and to support others going the way towards it.

I have started my Yoga Journey in Bangalore, India in 2016 with Master Akshar Ji.

After 2 years of practice, I completed a 10 months Teacher Training in Cork, Ireland to deepen especially the philosophy, anatomy and asana studies.

I have been teaching in Ireland and Italy and then completed Kundalini Yoga in 2021.

Finally, after few years, in 2022 I was able to come back to Mother India where I got a degree in Pre-Post Natal Yoga and as a Ayurveda Therapist at AYM School of Yoga, Rishikesh.

But my learning journey continues ... every day!

When somebody asks me what Yoga is I always find it hard to explain it theoretically. Yoga is not a school subject, gym course or a crazy ideology.

Yoga is a way of living our life. It is a tool that you can use on a daily basis to live with awareness, to live unified with yourself.

To unify yourself to Nature.

I am a Yoga Teacher and a Massage Therapist.

After a long Self-practice in Italy, I specialized in the teaching of traditional Hatha Yoga at the Himalayan Yoga School in Rishikesh.

After that I studied Ayurvedic Naturopathy and became an Ayurvedic, Thai and Sport masseur attending courses in Italy, Thailand and India.

First I worked in different studios and SPAs as Ayurvedic Therapist, then I decided to organize courses, retreats and workshops on my own or with partners, related to both Yoga and Ayurveda.

My Yoga teaching is focus on classical Hatha Yoga, inspired by Sivananda and Vinyasa but also on the yogic philosophy and Kundalini Tantra.

A special focus within my own life yet also in my teachings is on Tantric Buddhism from the Tibetanan Sakya School.

I am secretary of the Yoga Teacher Association "KARUNA GURU YOGA

If you think something about Yoga, Yoga is always beyond.

If you believe that Yoga is a practice to make you feel good, Yoga actually is beyond it.

If you believe that Yoga makes you calm and relax, Yoga is beyond those.

If you think that Yoga helps yout to concentrate, Yoga actually makes you go over focus and concentration.

“Yoga is light, which once lit will never dim. The better you practice, the brighter the flame. 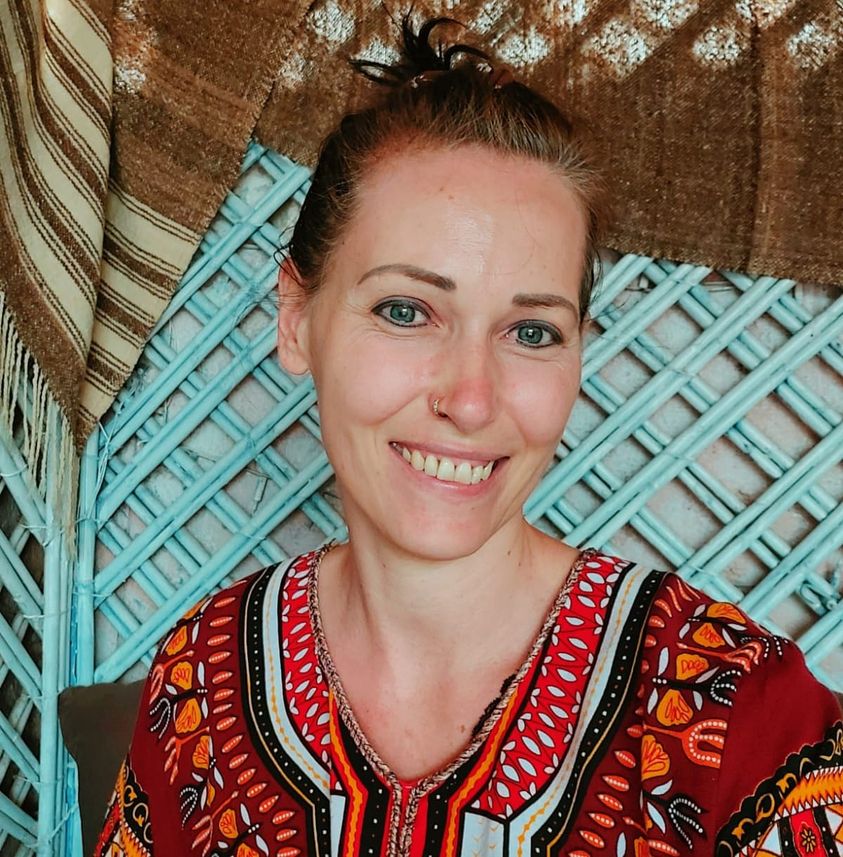 Trained in Vinyasa and Yin Yoga in India, Rishikesh and Goa, I found my home in the softness and depth of Yin Yoga as it allows me to fully connect with my body to strengthen and soften it in a deep and balanced way.

In my teaching I focus on a natural, harmonious and supporting atmosphere. In using singing bowls I intent to raise the healing effect for your Body and Mind.

At the moment I am teaching focus in on Marocco, back in my home country Austria as well as online together with partner institutions. 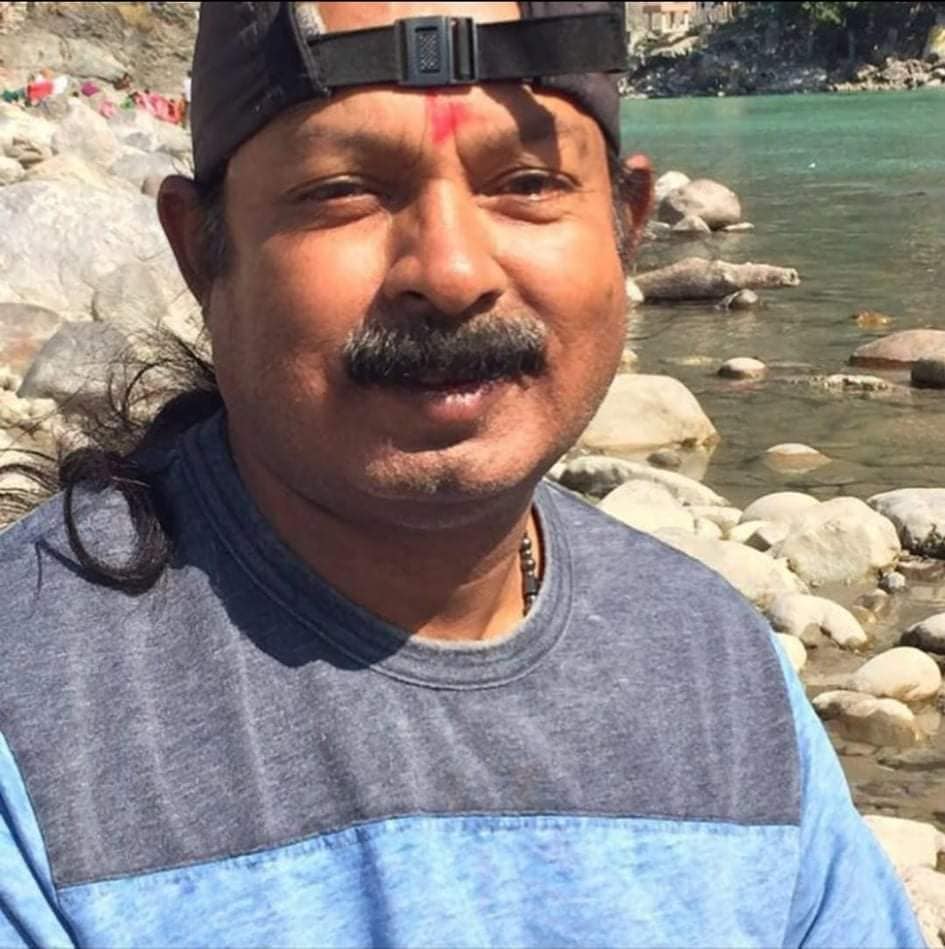 Since the Childhood, my personal interest was to know the truth about "The Universe" and "The supreme power" or Nature.

First time I came to RISHIKESH for spiritual study. Before that I was working in New Delhi in a multinational Company as an Asstt. Manager with an attractive salary package and post. My target was to complete the spiritual study which was only for one year, after that I had to go back and rejoin my own profession. But I could not go back, now more than 30 years have passed and I'm still at RISHIKESH. er the guidance of my spiritual teachers.

I've been living the life of a YOGI for 14 years with my spiritual Masters, living in different parts of the HIMALAYAS. Under the love and kind guidance and life time experiences of my Gurus and masters, I learnt many types of YOGA, Yoga sciences, Yoga Therapy, Meditation, Mantra Yoga, Kundalini Yoga, Ayurveda and  Natural Therapy as well as the knowledge of herbs.

Then I came back to Rishikesh and started teaching Yoga Science & Indian Scriptures to students at various Ashrams.

Most of the time I, have spent with "THE VISHVA GURU, YOGSAMRAT, MAHAMANDLESHWAR MUNISHANANDJI", who was the founder of international YOGA & MEDITATION INSTITUTE at Rishikesh, and lived for 104 years. I worked for the same Yoga Institute as a Yoga researcher.

Now my target is to spread the real knowledge of Yoga through all over the world. Unfortunately these days' people have spread the knowledge of YOGA and MEDITATION only as a means for the remedies of the physical problems.

But in real it is about eternal peace and bliss. 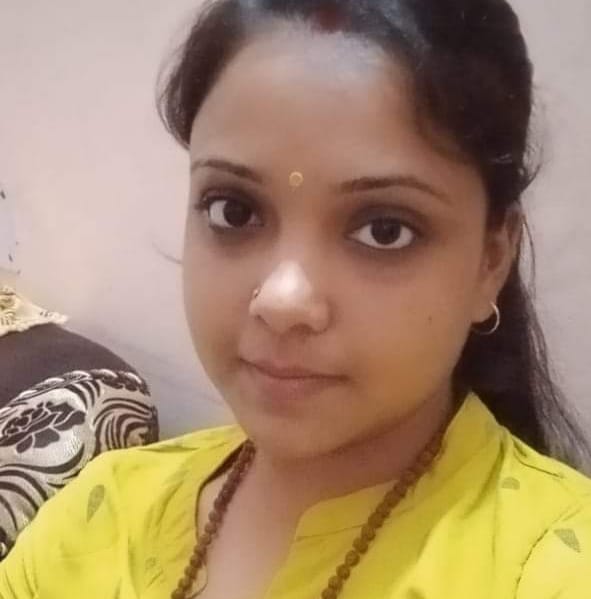 I have completed my education in Yogic Science from Uttrakhand University and Morarji Desai National Institute of Yoga, Delhi, India. I started teaching Yoga in the year 2013 in Delhi to school students to support them in building up a strong and healthy future. Later I worked as yogic therapist within personal yoga classes.  Yoga asanas and a sattvic diet are the natural ways to heal the body as well as the mind. In 2015 I moved to Rishikesh, where I started teaching Hatha Yoga, Anatomy and Physiology within Teacher Trainings.

It is my desire to remember that Yoga is not only practicing asanas for the body fitness, yet an art of living a beautiful, healthy and meaningful life.  Yoga teaches us how to maintain balance within our System and how to realize our divine energy. Yoga has no religion, no cast, it is the knowledge of human life, it is the way to be close to Nature.

As teachers it is our responsibility towards our students to motivate them to experience the true essence of Yoga and to support them in learning and practicing in the correct way. 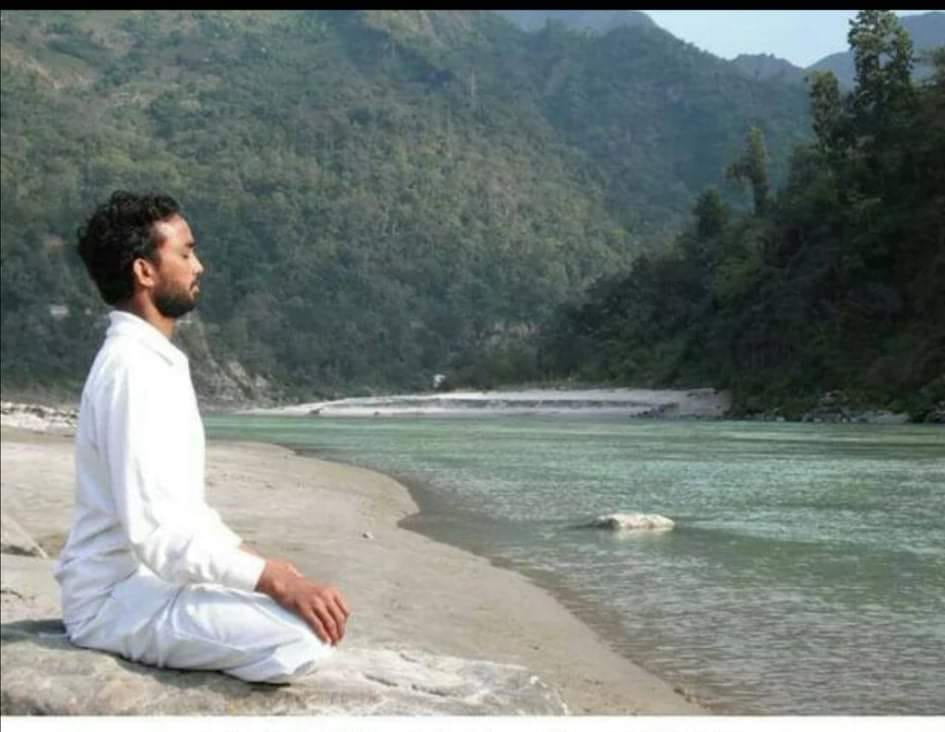 I have been practicing Yoga, Meditation and its Philosophy for the last 16 years, intending to follow the spiritual path in quest of finding the real Self with the help of the ancient Indian knowledge and my own realization.

I have been following a Yogic Way of Life since my childhood and stayed at renowned spiritual places like Himalaya, Haridwar and Rishikesh where I was deeply involved in practicing Yoga and Meditation and studying Indian Philosophy. Through my Yoga Teacher Training courses in Rishikesh and my practice under renowned spiritual Gurus like Swami Veda Bharati, Swami Dayananda and Yogi Buddhi Prakashji I gained profound knowledge and understanding in theory and practice.

Yoga is the simple yet profound process of consciously directing the outward flow of energy towards the source of existence within us … to experience peace, joy and calmness and finally become capable to know the “Truth”.

In that sense I am keenly sharing my teachings with spiritual seekers and Yoga students to enrich them with the secrets of Yoga.

Narayan Giri Maharaj is living in Silence (mauna sadhana) near Rishikesh on the bottom of the Himalayan forest Mountains next to Ma Ganga
Two years ago Naraya Giri Maharaj felt called to live in absolute Silence for 12 years, after living as a "full time Yogi" in the Himalayas and Rishikesh for 20 years to connect deeper to the divine.
His message to the world:
"Suffering arises when we are living against our Inner Truth!"
"Yoga is an internal process aiming to know our true essence, not an external physical practice!" 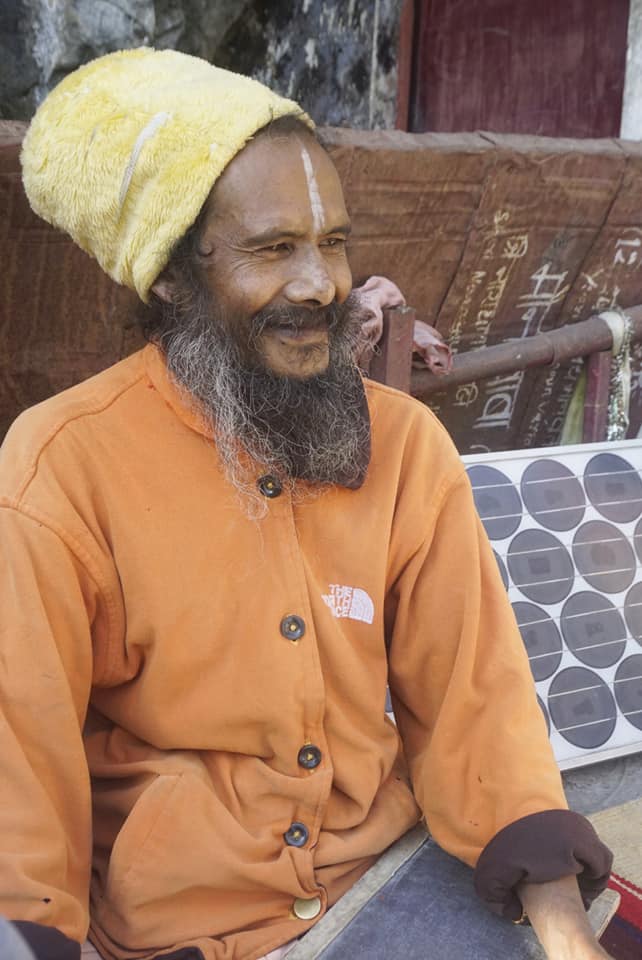 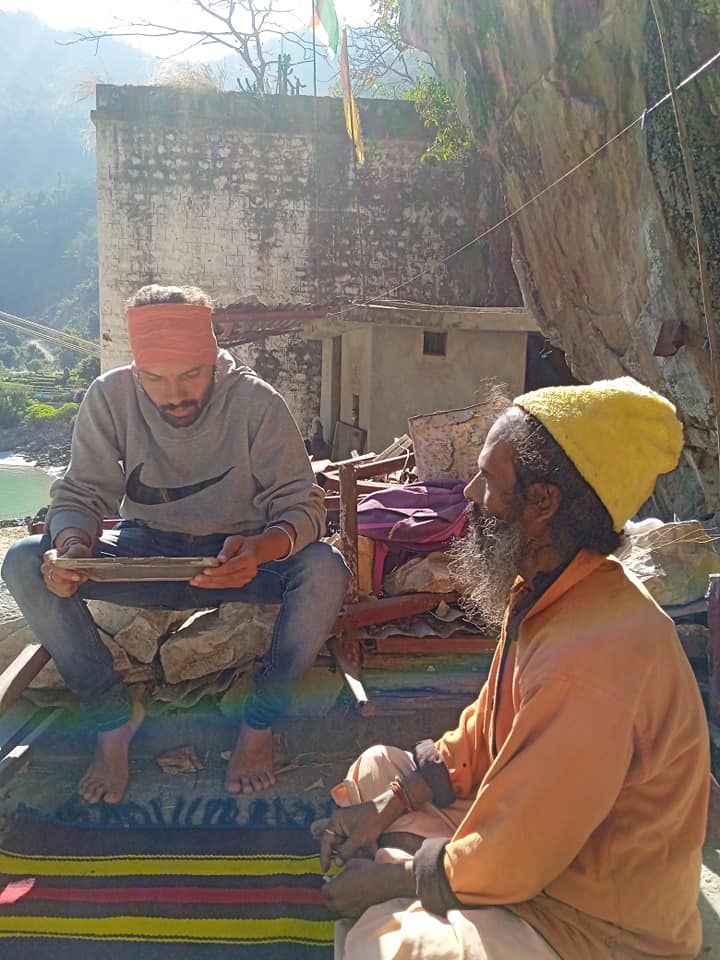 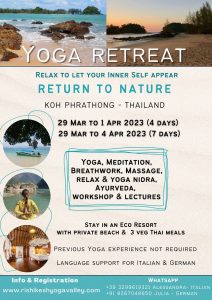 We are so pleased to know from you! 🙂